The Emergence of Consciousness along side New Technology 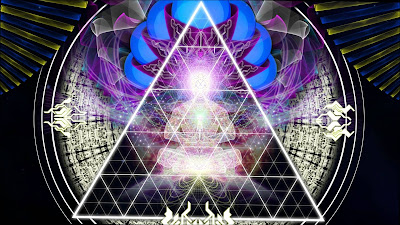 One day soon, lets call it singularity or something, it will be known and understood that Consciousness itself is what makes up all things. Its not merely just being in the conscious "waking" state. It is actually the animating stuff that is the basis of all physical matter, the aether so to speak. The thing behind the thing. Not what we would call "God" or the Source of all consciousness, but the imagination so to speak, flowing from the source of all things, taking many forms to experience itself, to evolve, to learn, to grow, etc. This world is ruled by, and most are slaves to, unseen forces and energies - outside of themselves.

We are all so intimately Connected, yet separated by a veil of illusion so to speak. These Laws of the universe that govern what we understand and call "Nature", we of course being a part of Nature and subject to such laws, are unbreakable. There are also Esoteric laws, many are aware of these, and a huge "remembering" phase is now occurring, relating to Consciousness. These immutable laws deal with principles, with polarity, perception, manifestation, emotions, and so much more, what have been deemed "extrasensory" perceptions. After all, "it", "life", is all perception. Light enters the optics of the eye, is then transmitted through electrical impulses and the agreed upon reality is projected, a shared reality. It is said that one can not come to know truth except through direct experience. Not just "subjective" truth, but that which transcends all things. Unifies all as one.

Merely absorbing knowledge and information without testing and verifying through direct experience is one of the many causes of ignorance, which reigns supreme in this strange 21st century digital dream. We already have too many who "intellectually" know, they pretend to lead and make policy from repeating what those from the past have dictated. We see those results on a mass scale. Unsustainability because of a system that no longer serves the whole. We can assume things, and we can pretend to take the word of "professionals" who spout the status quo on command. But alas, this all stumbles from the path, the point - to experience & grow, to realize... from our own consciousness, to technology. The Ultimate KNOWING done to prove such things instead of merely being a parrot. Until we open our minds to the infinite possibilities we once believed in as children, can we come to understand the true nature of our own being.

After all virtually all we think we know, like, participate in, etc, has been sold to us, via choices... Very few are operating within the web of life thinking for themselves, taking full personal responsibility for thoughts and actions allowed to manifest and taking into account what we do matters, and comes back to us ultimately, many times over. Most are on auto pilot. We all are or were at some point... How much exploring beneath what we are told have you done? And we are not talking about merely personal opinions, subjective opinions or conspiracy fantasy. We are talking about doing the work, as the mystics and consciousness explorer philosophers of the past have done. And as many today are doing, today. And if you have walked the path, have you reached the point where you know there is no going back to the old...

With the emergence of Technology comes a faster emergence of this shift in consciousness and what we are capable of. Now we could dabble and talk about Quantum Physics, string theory, singularity, simulation and even the current religious Dogmas or other belief structures of the human species. But it is quite evident, that very ancient knowledge, forgotten or erased from current memory, still exists. It is hidden in plain site for all with eyes to see and minds to perceive the mysteries. The personal journey that leads to the secret of secrets, that truly sets men free from their bonds.

The ever evolving Tech landscape that is now outpacing itself every few months is leading to new leaps and shifts in thinking - leading to innovation, or maybe the other way around. New technology is thought of and this then shifts the paradigm almost instantly, forcing the old consciousness to evolve once the old model is no longer of use. A natural step so it would seem. After all most of the Sci Fi stuff is already doable and being used. SpaceX, NASA, Skunk Works, Silicon Valley. I would wager these places could confirm some pretty big "conspiracy" theories regarding certain Tech, Free Energy and so forth, But this is not the point. The point is to understand Consciousness. The biggest "Mystery" so many seem to be working on, yet the answers are self evident for those who realize that consciousness creates and molds reality, like a plastic substance, intent, will, and energy all effecting the individual and the collective shared reality.

In the age of information, in which truth can no longer be contained, the pillars of empire crumble under the hypocrisy of the illusions they sell at every turn. Truth yearns to shatter these illusions. To free us from our own prisons, self imposed by ignorance in these strange days. We have as a species turned on ourselves. This is why we see the chaos turned up to max. The pundits and the leaders scramble to distract the masses from the leaking of information that makes them complicit to the illusion. They clamp down on the flow of information labeling anything that goes against the status quo story line as "fake news", as they threaten Nuclear war , their last grasp at maintaining power and control. Corrupted fools attempting control over something of which they have no true control. Humanity is awakening, we are coming to the point of singularity where consciousness will be known for what it is. You feel it deep within, beyond the mere intellectual, beyond the deep programming, beyond the fear that you can do nothing about it. Free your mind. Step through the doorway, go within and the truth is revealed.

Each new advancing Technology, in hand with radically changing world views no longer confined to a "box" of any kind assists in the break down of the current control structure in search of a more sustainable future, and a more conscious and compassionate demeanor towards each other and the planet we find ourselves living togetther on. Beyond Ego, beyond these warped and corrupted political ideologies that divide rather than unite. Each of these shifts, act as ripples across the ocean of interconnected chaotic organization. Cryptocurrencies for instance are something out of the matrix, yet a natural evolution it seems in a system corrupted to the core by its own hypocrisy and rigged system built on debt and control. Its own unevolving consciousness of control no longer suited to its environment in an ever changing world. Systems upon systems. Tech and Consciousness, Reshaping perception, molding new thought, shattering illusions in their wake, while awakening to a new way of being.

The old system is rigid. It serves only itself and not the whole. ALL things are ONE. Those who get "it" well...... eventually everyone will when they can no longer prop up the illusions in place to protect fragile Egos from seeing what is right in front of them. When people see each other as themselves, as one. Well... Cognitive dissonance sucks for awhile, but we all have to go through it at some point. Growing pains. And then opportunity. Like never before. Anyways. Yeah. That is it for me. Comment if you like, not trying to convince anyone of anything so no need to engage in any back and forth rhetoric. Just an objective observer in the land of make believe, moving paper dollars into cryptocurrency while navigating this journey.... None of this is "secret" anymore

You are what you IMAGINE yourself to be...

Happy New Year! Welcome to the Premier online source for Moldavite, Phenakite, Herks & many of your favorite crystals. Sign up to get exclusive access to all things IVC in 2020